In a near future the world has been devastated by wars. Now strange creatures battle each other in the smoking ruins of Earth's cities. They are the Mutanimalz; Genetic engineered creatures with the ability to utilize morph-pads to change into new and powerful forms! Devastate your enemies up close as the powerful beast! Wreck havoc from above with the flying bird! Control the ground with the sharpshooting spiky!

Inspired by the classic game of paper, rock, scissor the three different forms is designed to have an advantage over one form and a disadvantage against another. If you are getting pummeled, just change to a new form to gain the edge. While it's beneficial to have a certain form against a given opponent, a skilled player can still do considerable damage with any form.

The first version of "Mutanimalz" was created in 48 hours during Danish game jam "Indie9000" in the fall of 2011. The game is intended to be a party game, fast and intense yet simple. Anyone can pick up a controller and learn to play in no time! Since then Team Bismuth has kept developing and polishing the game. We will continue to do so until we consider it perfect! 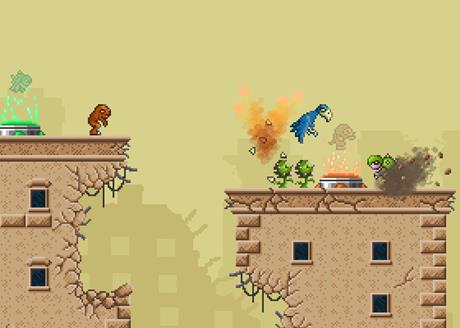 This game won "Best game" at Indie9000 2011 for its many polished features and for simply being straight up fun!