Tønde Tærsk (Barrel Beat) is a multiplayer game inspired by the Danish tradition of "Fastelavn" or carnival. 2-4 players must compete to be the one to smash the barrel using ninja ropes.

The Danish version of Carnival is called Fastelavn. An old tradition was to put a black cat in a barrel and beat it with sticks to prevent the plague! Horrible! We love cats here at Bismuth! Luckily this tradition of killing cats stopped in the 1830's, though the beating of the barrel still remains. Now there's candy inside instead so everybody wins. But enough with the history lesson! You are here to play some games!

The object of the game is to score the most points by hitting the barrel. The harder you hit it, the more points you get. The unique aspect of the game is that you exclusively navigate the stage using ninja ropes. Grap onto something and gain enough momentum to deliver a smashing blow to the barrel.

“Everything being a constant carnival, there is no carnival left.” ― Victor Hugo
Download 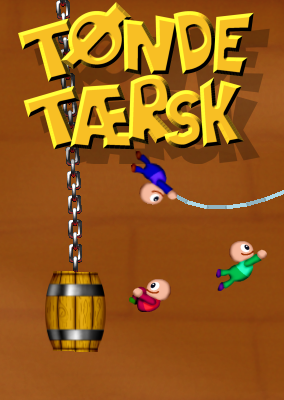